We All Want to Change the World: An Introduction to the Series, Early Women Pioneers in Career Development

“You say you want a revolution? Well, you know. We all want to change the world.”

This era ushered in sweeping changes across fundamental social structures including the economy, world of work, educational system and government. Those revolutionary changes mirror many arising in today’s world of work.  This includes equitable education and workplace opportunities for all races, genders and locales (Merlenbach & Patterson-Mills, 2020).

By 1837, women were employed in over 100 different occupations (Ritter-Beard, 1920). As early as 1843, women’s roles in society and in the world of work was a primary topic across suffragist and abolitionist platforms. “Half a century ago [1843] women were at an infinite disadvantage about their occupations. The idea that their sphere was at home, and only at home, was like a band of steel on society” (Stone, 1893, para. 9). A lack of access to education, types of work, equal pay, the vote, and benefits based solely on one’s gender or skin color seems to echo issues of today.

In 1909, Frank Parsons’ Trait and Factor Theory was published in Choosing a Vocation. He focused on men’s occupations and matching personality traits, revealing a fit between personality and work environment. Unmentioned by Parsons, 20% of all women were working outside the home at the turn of the 20th century, more women than men served in trade and transportation sectors, and in general, fewer women were choosing fields that were traditionally feminine (Stockman Dickson, 1919). Despite the presence of working women, no women made it into his text. Progenitors of the career development field included male contributors (Brewer, 1942; Richards, 1881) with an occasional mention of female visionaries such as Ogilvie Gordon and Lucinda Wyman Prince (Brewer, 1942).

As one author coined it, “historical amnesia” may occur when women are omitted from written history (Oakley, 2018). The reasons for this need to be understood in the context of the Progressive Era. First, it was more acceptable for women who worked outside the home to be in the fields of nursing, teaching and social services because they were extensions of their traditional roles in the home (Oakley, 2018). Often this work was minimized as “women’s work”, thus discredited as a viable career choice. As a result, women were often marginalized, and their contributions usually not noted.

However, they did contribute to the burgeoning of career development in a variety of roles. They worked as vocational bureau employees (Schmidlap, 1908; Perkins, 1910; Robison, 1917; Stockman-Dickson, 1920), occupational outlook authors (Beardsley Butler, 1909; Gordon, 1908; Hoerle & Salzburg, 1919), and employment training leaders (Leigh, 1921; Norton, 1917). Sometimes, their contributions were written under male pseudonyms (Reed, n.d.), written with a male co-author (Hollingworth & Hollingworth, 1916), or masked under the umbrella of a larger governmental agency, such as the United States Employment Service (Kellogg, 1933). As Savickas (2013) pointed out in his closing presentation at NCDA’s 100th anniversary conference in Boston, “Sometimes, women are anonymous.” 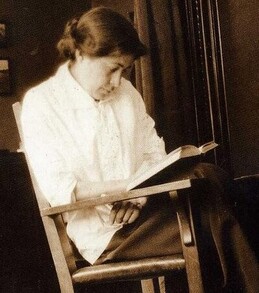 In the early 20th century, a widely held belief referred to as “periodic functionality” existed. It held that menstruation caused women to have lower intelligence, and impaired physical performance, strength, and stamina during ovulation.

Two female psychologists sought to disprove this social norm and fought to be admitted into doctoral programs so they could scientifically prove the case against periodic functionality. Helen Thompson Bradford Woolley (1903) and Leta Stetter Hollingworth (1914) were forerunners who challenged the conventional notion that women were weaker physically and intellectually, because they were women. Their research advocated against the oppression of women and led to scientific evidence proving no gender differences in performance or cognition. Their viewpoints were critical in two ways. First, they advocated for inclusive education as it increased IQ. Second, their work contributed to the push for equity of pay and employment rights.

In 1898, Woolley was the first American woman to study gender differences in mental traits. She concluded there were no gender differences of ability between men and women implications regarding vocational training and work (Woolley, 1903). She also introduced the notion that one’s abilities are influenced by their environment (Milar, 2010). This conclusion was met with skepticism and doubt from contemporary male colleagues (Ryan, 1918).  In 1913, she presented a paper at the National Vocational Guidance Association (NVGA) conference, the forerunner of the NCDA conference, the first national meeting of the career development field. In her paper presentation, she advocated for employing students’ strengths and interests when pursuing work. Woolley was one of the first psychologist to use a large sample for testing a new psychological and vocational scale with testing 5483 subjects (Rodkey, 2010).

While studying at Columbia College, Hollingworth (1914) also disproved the belief that women were weaker mentally. Hollingworth (1914), under the tutelage of Thorndike in 1900, also set out to negate another common belief, called the “variability hypothesis” - that men outperformed women.  It was reasoned that women fell in the average area of the bell curve with regard to physical and mental traits, whereas men could excel above the average on the bell curve, with some men excelling far beyond what a woman could accomplish. (Hollingworth, 1914). Hollingworth (1914) argued against the theory of variability stating,

It seems indubitable that great numbers of women of intellectual gifts, confronted with the necessity of choosing a "career" or "domestic happiness," have chosen, either consciously or unconsciously the latter. And it must be remembered that even the possibility of a choice has existed only in recent times; that throughout almost the whole course of history women were predestined to their work of housekeeping. (p. 527).

Later, she investigated environmental factors (e.g., gender, father's nationality and the size of the student's school) that contributed to success in life (vocationally and academically).  She believed parents and children should actively engage in self-reflection to determine future employment choices (Hollingworth & Hollingworth, 1916).  Expanding on Hollingworth’s findings, Margaret Whiteside Moore (1933) asserted that early developmental processes and the influence of one’s environment, such as a strong early elementary education, was a significant predictor of future success. The work of these women directly impacted career development by opening discourse on the scientific basis for gender differences at work or school.

Today, assumptions and biases based on gender and other stereotyped lenses continue. Left unchecked, discrimination may invade the client-practitioner relationship, the client-work environment system, and the client’s opportunities in the world. Bravery to dissent and oppose social norms through research, as was accomplished in the works of Whiteside Moore (1933), Hollingworth (1914), and Bradford Thompson Woolley (1903) was one of the first steps in removing barriers to educational and vocational opportunities for women.

Today’s practitioner is positioned to foster the client’s initial awareness regarding employer biases. Like the early women visionaries, women and minorities of today continue to face implicit and explicit biases. Through careful reflections of meaning, feeling, and content, career practitioners may open up space for their clients’ voices to be heard.

An exploration of feelings surrounding how social constructs may have been powerful barriers to their career successes can enhance clients’ understanding of themselves and their self-efficacy. Shifting focus to external barriers may be one early step to deepening clients’ perceptions of internal barriers. Ultimately, this can set the stage for ‘readiness to change’ and mobilize career clients from contemplating action to acting on it (Prochaska & DiClemente, 1982). These processes will be illustrated through action-oriented early female vocophers in the next article in this series on pioneering women in career development.

Leigh, R. (1921). The human side of retail selling: A textbook for salespeople in retail stores and students of retail salesmanship and store organization. The University of California.

Norton, H. R. (1917). Department store training: An account of the training methods developed at the Boston school of salesmanship under the direction of Lucinda Wyman Prince. Department of the Interior Bureau of Education, 9. Washington Government Printing Office. https://play.google.com/books/reader?id=_f6s4E3VRRwC&hl=en&pg=GBS.PP5

Perkins, A. F. (1910). Vocations for the trained woman other than teaching. Longman’s Green & Company.

Reed, A. Y. [published anonymously]. (n.d.). An 8th grade primer. Developed for the Women’s Century Club to present at the Centennial Celebration of the Lewis and Clark Expedition in Seattle, Washington.

Richards, L. S. (1881).  Vocophy: The new profession. A system enabling a person to name the calling or vocation one is best suited to follow.  Pratt Brothers, Steam Job Printers.

Stone, L.  (1893). The progress of fifty years. Speech to the congress of women held in the  woman’s building at the world’s  Columbian exposition.  http://womenshistory.info/progress-fifty-years/

Woolley, H. T. (1903). The mental traits of sex: An experimental investigation of the normal mind in men and women. Chicago: The University of Chicago Press.-Thompson, H. (1903).

Sarah Patterson-Mills, Ph.D., LPC, is the Assistant Dean of Counseling, Behavior Analysis and Undergraduate Social Work, the School Counseling Program Chair, and Associate Professor in Counseling at Lindenwood University. She earned her doctorate at St. Louis University in Counseling and Family Therapy in 2010, is a licensed therapist with over 15 years of experience working with a variety of clients across the lifespan, and a 7th -12th grade school counselor. At Lindenwood, she teaches a variety of school counseling and career counseling courses. She serves as Co-Chair of the NCDA Ethics Committee and is the editor of Ethics in a Nutshell column  in the  Career Developments magazine. For the last three years, she has served on the Association of Counselor Educator and Supervision, School Counseling Supervision Work Group.  Her research interests include supervision of school and career counselors and in feminist counseling theory and practice. She can be reached at spatterson-mills@lindenwood.edu.

Sarah...it is so refreshing to read your piece and to see your commitment to look deeper than many and to honor the contributions of our sisters left out of much of “his story”... thank you

Rich,
Thank you for your comments! It's hard to fit it all in and there is so much more. I appreciate all that has come before.
Best,
Sarah

Sarah--Thank you so much for this and for bringing back the erasure of women in the early days of vocational psychology and career development. I have taught in this field for years and did not know about these women. Wonderful!

Congratulations on an excellent article!

What an important piece! You very skillfully drew our attention to overlooked history and those still overlooked in our present.

Thank you, Sue! There is so much more to uncover. Thanks for reading!

Deneen,
Thank you! Lots to come.

Emily,
I am glad you liked it. Next article features women vocophers. Stay tuned.

I was drawn to this article because of the accounts of my Grandmother-in-law working in the field of Workforce Development in our state probably in the late 1930's and 1940's. I definitely appreciate the work of those who have gone before!

Wanda, I would love to talk to you about your grandmother's experiences. If you are able, please email me at spatterson-mills@lindenwood.edu. Thank you for reading!